Why include a card stunt in an event or promotion?

Card stunts are one of the great spectacles associated with sporting events and corporate events. Card stunts form remarkable images that are forever embedded in the minds of the audience. Everyone loves to be part of the show; no other medium allows the audience/card holders to make up such a big part of a show or event. Card stunts can also be a valuable team building experience at corporate events, creating rapport among team members while producing compelling promotional images.

How big does a card stunt need to be?

Kivett Productions has created card stunts as small as 20 cards and as big as 130,000 cards. No project is too big or too small. The Billboard Card Stunt process is normally used for smaller stunts. This process transforms each card holder into a puzzle piece. The individual card holders or puzzle pieces come together to form the overall image.

Will the audience members participate?

How long should the audience hold up the cards?

It normally takes 10-15 seconds for the card stunt to fully develop. On average, a card stunt should last between 60 seconds and 3 minutes.

Can a card stunt be used as a corporate team building exercise?

Absolutely! Card stunts are a fun, unique way to involve everybody in your company and encourage teamwork while producing high value images and video that can be used in your marketing collateral.

Has Kivett Productions ever had a card stunt that did not work?

Over the past 24 years, Kivett Productions has produced over 150 card stunts with only one failure. A decision by a show director to allot only 20 seconds in the show for the card stunt was the cause of the one stunt that failed. By the time the audience realized the stunt was happening it was over.

Who creates the designs?

Kivett Productions’ design team creates the designs based on input from the client. This service is included in the cost.

How many card stunts are normally created?

Kivett Productions almost always creates two card stunts per event versus one (utilizing one card). The biggest expense in creating a card stunt is the cost to print the cards. Each card has to be printed on both sides (regardless of the number of stunts), inserted into a plastic bag, sorted, boxed and shipped. Therefore, two card stunts are normally created for each event. Kivett Productions offers a 5% discount for clients who want just one card stunt.

Can more than two card stunts be created per event?

Who prints the cards?

Are the cards inserted into plastic bags?

Each card comes shrink-wrapped in a plastic bag; this is included in the cost. A surcharge of 12 cents per card is added for custom-printed plastic bags.

Who places the cards in the stadium?

Kivett Productions hires local volunteer groups to place the cards in the seats; military ROTC groups are preferred. The groups are paid an honorarium based on actual man-hours worked.

Who supervises the placement of the cards?

A team from Kivett Productions will be on-site to coordinate the placement of the cards in the venue and supervise the volunteers.

How are the cards attached to the seats?

A small piece of masking tape is used to attach the cards to the seats. Kivett Productions uses a special masking tape that is easy to remove and does not leave residue. Stadium management should be made aware of this.

How is the audience instructed to participate?

Part of the card stunt cost includes creating all the instructions required to instruct the audience on when and how to perform the card stunts. Instructions and diagrams are printed on each card, and PA announcements are written by Kivett Productions.

How is the audience cued?

There are three ways to cue the audience:

A Production Manager from Kivett Productions will call the cues.

Are there sponsorship opportunities?

There are several ways that the card stunt sponsor can get recognition:

What is needed from the client to get started?

What is the lead time required to create a card stunt?

Depending on the number of seats included, the lead time to create a card stunt ranges from four to eight weeks. Production can happen faster, but rush charges may apply.

How will fireworks and in-stadium pyro affect the card stunts?

How much does a card stunt cost?

For Traditional Card Stunts, where each card is a solid color printed on paper, the costs range from $1.10 per seat to $3.50 per seat. The more seats, the lower the cost.

For Billboard-Style Card Stunts where the cards are digitally printed on paper, the costs range from $3.00 per seat to $6.00 per seat.

For Billboard-Style Card Stunts where the cards are digitally printed on Coroplast, the costs range from $25.00 per seat to $58.00 per seat.

Contact us to determine which method or methods are best for your event. 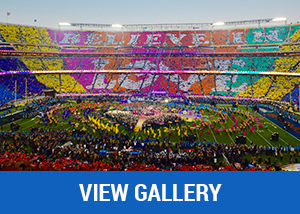